The first known manufacturing company tenant of the building was Huseby Cycle Company in 1896. Although the company was not among the largest in this time, it was an innovative and unique cycle company. Probably the most significant feature of the Huseby bikes were their use of wood in manufacturing wooden bikes: ÔÇ£Wood frames are a specialty with this company, and they are the only manufacturers of the same in this or any other country.ÔÇØ

The companyÔÇÖs modern production line was able to make 40 bikes as a day, employing 75 skilled workers. Just one year after the establishment of the Huseby Cycle Co., William Casper, the president, died on April 16, 1897, at the age of 58. This, along with the emergence of affordable automobiles for the public around the time, spelled the end for the company.

The next major tenant of the Artisan Lofts building was Kalt – Zimmers Manufacturing Company, producer of women’s and children’s shoes from 1897-1909. The company began with the production of overgaiters; however the company expanded quickly. With their relocation in 1897, they added leggings and lamb-wool soles to their productions.

The biggest move of the company perhaps was in 1901 when they also began to manufacture childrenÔÇÖs shoes, which the company became particularly well-known for later.

Between 1910-1923 a series of businesses occupied the building, including Wisconsin Lake Ice and Cartage Co. in 1912, Drake Manufacturing Co.┬á(electric cigar lighters) in 1913, The Great Lakes Rubber Co., The Badger Belt and Rubber Co., Milwaukee Box Toe Co., among others.

The Sperry Candy Company moved into the building in 1924. They are most famous for their Denver Sandwich and Chicken Dinner candy bars. Chicken Dinner was one of the early nut-roll bars and first came out in the early 1920s. The first Chicken Dinner wrappers pictured a whole roasted chicken sitting on a dinner plate. In the years following World War I, the economy made many families feel fortunate if they had one good meal a day on the dinner table. A whole roasted chicken on a candy bar wrapper symbolized something substantial in terms of food value. To help promote Chicken Dinner, Sperry decorated a fleet of Model-A Ford trucks with eye-catching sheet-metal bodies built to resemble chickens.

Eventually, the Sperry people learned that a chicken didn’t convey a candy bar image, so the bird was dropped from the wrapper. The name, however, continued. Sperry Candy Company of Milwaukee WI introduced the Chicken Dinner Candy Bar in 1923 with the slogan ÔÇ£Candy Made Good.ÔÇØ Good like candy, but also good like chicken dinner. An ad to the trade explained the reasoning behind the name: ÔÇ£A name which suggests the best of something good to eat, and known to every child.ÔÇØ Sperry seemed to think that a big roast chicken was the best lure for the kiddie market. Chicken Dinner originally sold for 10 cents, the high end of the candy piece market. Sperry described it as ÔÇ£an expensive, high grade candy, put up in convenient 10 cent packages.ÔÇØ

Neither in the ads nor on the package did they say much about what was actually in the candy bar. The innovation and excitement of Chicken Dinner wasnÔÇÖt nuts or nougat, it was the name. Chicken Dinner meant quality and goodness.┬á What it did not mean, at least not directly, was meal replacement. In the 1920s, not everyone realized that advertising was the secret to success. Candy bars that were heavily advertised from their inception would go on to bigger and bigger shares (anyone could have realized in the early 1920s that Milky Way and O, Henry! would be the ones to watch). There was no TV in those days. Radio advertising wouldnÔÇÖt really catch on until the 1930s. So live interactions with the candy-buying public were the only way to get the word out. Chicken Dinner billboards were a common sight around the land. But Sperry wasnÔÇÖt just waiting around for potential customers to pass by to see the sign. In 1926, SperryÔÇÖs advertising experts came up with the idea of putting Chicken Dinner signs, and big colorful chickens, on automobiles and driving them around cities drumming up excitement. Back up was provided by teams of window trimmers, artists, and even circus clowns.

Behind the scenes, Sperry was assigning advertising staff to work permanently in the field to support distribution and sales. This was a new idea; most companies sent their goods off with jobbers who made the distribution rounds in different locations and didnÔÇÖt stick around to provide marketing support. The best thing about Chicken Dinner besides the name was the chicken cars, which became quite elaborate. Fleets of Chicken Dinner cars or trucks would arrive in town to deliver the candy goods. Production of Chicken Dinner bars ceased in 1962 after PearsonÔÇÖs, the makers of Bit-O-Honey, bought Sperry. Chicken Dinner Candy is selected by Time Magazine as one of the 13 most influential candy bars of all time. 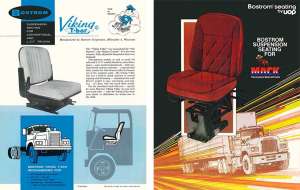 The last manufacturer to call the building home was Bostrom, an industrial seating maker who occupied the building in the 1970s.